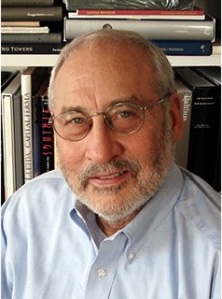 Joseph E. Stiglitz is University Professor at Columbia University and Chief Economist of the Roosevelt Institute. In 2001, he was awarded the Nobel Prize in economics for his analyses of markets with asymmetric information. He was also lead author of the 1995 Report of the Intergovernmental Panel on Climate Change, which shared the 2007 Nobel Peace Prize. In 2011, Time named Prof. Stiglitz one of the 100 most influential people in the world. He was a member of the Council of Economic Advisers during the Clinton administration, later serving as Chairman. Prof. Stiglitz was previously Chief Economist and Senior Vice President of the World Bank. He was Chair of the Commission of Experts on Reform of the International Financial and Monetary System, which led to the Stiglitz Report in 2009. Prof. Stiglitz is the author of numerous books that have been influential in shaping global debates, including Globalization and Its Discontents (2002) which has been translated into 35 languages. His most recent books are The Great Divide: Unequal Societies and What We Can Do About Them (2015) and Rewriting the Rules of the American Economy: An Agenda for Growth and Shared Prosperity (2015). Prof. Stiglitz is the recipient of more than 40 honorary doctorates. He was awarded the prestigious Loeb Prize for his contributions to journalism, the European Literary Prize, the Bruno Kreisky Prize for Political Books and the Robert F. Kennedy Book Award. He is a fellow of the National Academy of Sciences, the American Academy of Arts and Sciences, the American Philosophical Society, the Econometric Society, and a corresponding fellow of the Royal Society and the British Academy. Prof. Stiglitz has been decorated by several governments, including Colombia, Ecuador and Korea, and most recently became a member of France's Legion of Honor. A graduate of Amherst College, he received his Ph.D. from MIT.

For those who are interested in attending this event, please sign up with Asia Society Hong Kong Center directly:  http://asiasociety.org/hong-kong/events/striving-growth-perilous-environment-economic-outlook