**We have reached our capacity for the event. Thank you for your support and interest!** 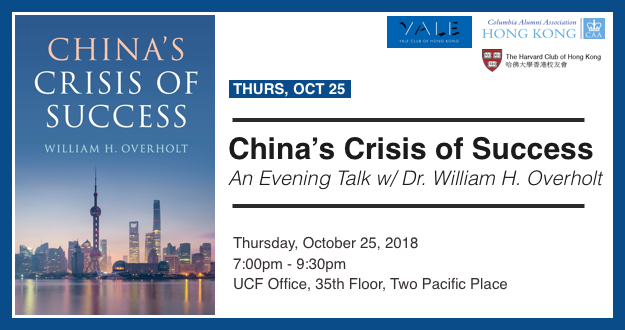 Please join Dr. William Overholt and the alumni clubs of the Columbia University Alumni Association of Hong Kong, The Harvard Club of Hong Kong, and the Yale Club of Hong Kong, as we explore China’s rise to superpower status, forecast what lies ahead, and examine critical issues of political strategy, economic transition, inequality, corruption, environmental degradation, and globalisation--findings from his new book, China's Crisis of Success.

Dr. William H. Overholt holds a research position at Harvard's Kennedy School and is Principal of AsiaStat LLC, a consulting firm. He was President of Fung Global Institute in Hong Kong 2013-2015. Previously he held the Asia Policy Distinguished Research Chair at RAND's California headquarters and was Director of RAND's Center for Asia Pacific Policy.

During 21 previous years in investment banking, he served as Head of Strategy and Economics at Nomura's regional headquarters in Hong Kong from 1998 to 2001, and as Managing Director and Head of Research at Bank Boston's regional headquarters in Singapore. At Bankers Trust, he ran a country risk team in New York from 1980 to 1984, then was regional strategist and Asia research head based in Hong Kong from 1985 to 1998.

At Hudson Institute 1971 to 1979, Dr. Overholt directed planning studies for the U.S. Department of Defense, Department of State, National Security Council, National Aeronautics and Space Administration, and Council on International Economic Policy. As Director of Hudson Research Services, he did strategic planning for corporations.

Dr. Overholt is the author of eight books, including Asia, America and the Transformation of Geopolitics (Cambridge University Press and RAND, 2007) and Renminbi Rising: A New Global Monetary System Emerges (Wiley Press, 2016).The others are: The Rise of China (W.W. Norton, 1993), which won the Mainichi News/Asian Affairs Research Center Special Book Prize; Political Risk (Euromoney, 1982); and (with William Ascher) Strategic Planning and Forecasting (John Wiley, 1983). He is principal co-author of: Asia's Nuclear Future (Westview Press, 1976) and The Future of Brazil (Westview Press, 1978). With Zbigniew Brzezinski, he founded the semi-annual Global Political Assessment in 1976 and edited it until 1988.